(Philadelphia, PA–August 18, 2015) Inspired by Brian Mooney, an English teacher who shared and utilized Kendrick Lamar’s To Pimp a Butterfly album lyrics with his students at High Tech High School, and Kendrick Lamar’s visit to the school shortly after his performance at Hot 97’s Summer Jam, OogeeWoogee, a global multimedia outlet with an emphasis on Hip Hop and counterculture, has instituted an annual “Be Alright” College scholarship, named after Kendrick Lamar’s eponymous song, announced Dr. Joseph Giammarella, Principal of High Tech High School.

Hip Hop pedagogy has been implemented in national and international school curricula for years.  OogeeWoogee claims that Hip Hop has educational significance that permeates the entire global culture of Hip Hop.  The first known scholarship named after Kendrick Lamar, OogeeWoogee’s “Be Alright”will offer students an opportunity to win a $1,500 college scholarship that will be applied to books or tuition.  The winner will also have the opportunity to travel to Philadelphia, have his or her work screened at OogeeWoogee’s brand new, in-house multimedia studio, and have it published on its website and spread throughout its social media platforms. 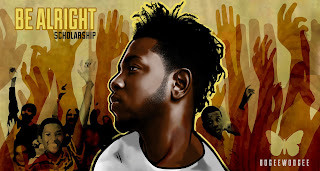