Traditional music set the tone for the cultural scenery and delicacies of Petales de Rose. The students in the French classes commandeered booths, all of which represented the diversity of Paris, Provence, Bretagne, Normandie, Alsace, Lorraine, and Champagne-Ardenne, for instance.  Each booth served as a proprietary establishment that offered traditional food and drink, with a decor that provided visitors insight into the way that citizens in a particular region live. The managers of Petales de Rose, Jennifer Argumedo of North Bergen and West New York resident Helen Torres, oversaw the decorations, themes, music, and other elements associated with the cultural experience.

Students and visitors explored not only the culinary features of the region, but also the historic and cultural sites, which have played integral roles in the cafe itself.  Classes contributed personalized postcards sent from the regions that they explored and represented, which each postcard describing attractions and meals germane to a particular French region. Artistically-designed cards could be found on the tables in the booths for the guests to read and enjoy while they partook of a crepe or even a meal of their choice.

“Every year, this cafe is stunning and wonderful,” notes Argumedo, “but this year, we all worked as one, and everyone helped each other out through thick and thin

High Tech senior Alex Miranda of North Bergen described the French cafe as “unique and inviting”, adding, “this year was my favorite because of all the beautiful scenery and decorations that made the cafe seem like a real entrepreneurship.”

An annual event, Petales de Rose acts as the sophomores French II classes’ marking period project. It provides students with the opportunity to experience the making, tasting, and culture of each and every French region that they had learned about in French II.
Later in the school year, the students will visit an authentic French restaurant, made possible through the profits from Petales de Rose. 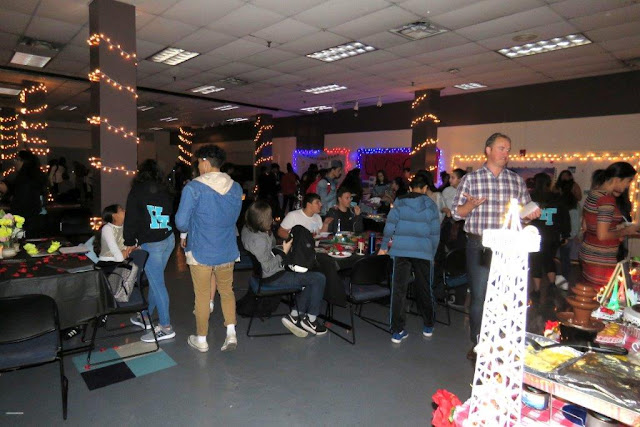