Covered head-to-toe in a baggy white suit complete with thick gloves and a mesh net helmet, Jessenia was prepared to step into the cage behind High Tech High School, a countywide public high school based in North Bergen.

Inside that cage were untold numbers of the school’s tiniest inhabitants, busily working on their own group science project, generating honey and wax.

It was all part of a new apiculture (beekeeping) class offered by the school to sophomores beginning this year. The cage contained apiaries built in the school’s woodworking classes, housing bees provided by North Bergen beekeeper Antonio Quinlan, founder of the local business Hudson River Honey LLC.

_____________
“It’s pretty cool. It looks scary but it’s going to be a fun experience. I’m really looking forward to this.” –Mariam Abdelmoula
____________
Last year Quinlan formed a nonprofit organization, Hudson River Apiary Society, and approached Frank Gargiulo, Hudson County Schools of Technology’s superintendent of schools, about an idea that had been brewing in the back of his mind for years: teaching kids in the local school system about bees.

“It happened to coincide with a lot of buzz about bees in the news,” said Quinlan with a wink. “He was very open to the idea.”

Soon the apiary was built and an afterschool club formed. Eight to 10 students signed up, with a core of three or four attending regularly. Science instructor Arun Srivastava, teacher of zoology and biology, signed on as club mentor.

As word spread, more students expressed interest. Srivastava, known as Dr. S, saw an opportunity to make it a regular school offering. “They were putting so much time into it,” he said. “Why not get some credit for it?”

That fit in with Quinlan’s goals, so Dr. S drafted a curriculum aligned with state standards and submitted it for board approval.

The class became the centerpiece of even more programs. “It’s a very interdisciplinary project,” said Assistant Principal Allyson Krone. “The woodshop guys built the deck. The video production teacher and his crew did a whole special on it. The graphic arts program designed labels and they’re doing a whole marketing scheme to sell the honey. So everyone kind of got involved.”

Good for the environment

“It started out as a hobby and a natural urge to protect the bees,” said Mihir Vora, one of the original club members, now enrolled in the class. “I knew before about colony collapse disorders, CCD, so I felt that it’s a good way to participate in the community and also learn more about bees and strive to protect them. This is actually a perfect environment for it because you see all these flowers that have different types of pollen.”

Surrounding the apiary are flowers and plants, from which the bees extract pollen to create their honey.

Muhammed Umar joined the club and the class with similar goals. “The main reason is to save the bees,” he said. “And also the fact that they’re growing honey here and it’s supposed to be a better source of honey to help your immune system. Because the closer it is to you, the more beneficial it is.”

Honey from last year’s colony, the one established by the club, was harvested this year. “It’s good quality stuff,” said Dr. S. “It’s competition quality because it’s very clean. These bees are not fed by any artificial means. Most of the colonies you see, they feed them. Even if they call them natural, they provide the source of food, so it’s not really natural. But this one is all natural. It’s all local.”

The class begins with a history of beekeeping and progresses to bee management and bee conservation. “The most important part from my point of view is to tell them that these are the agents who plant entire forests all over the world,” said Dr. S. “Bees are one of those keystone species which really keep this forest environment going.”

Students will attend regular classroom lessons during the day and then have hands-on time with the bees every other Friday from 3 to 5 p.m. “It’s a year-long process, spring to spring,” said Quinlan, noting the time it takes for a colony to produce honey.

Already Quinlan has demonstrated how to extract the honey from last year’s crop. Upcoming are classes on cleaning and straining the wax, then mixing it with other ingredients to create lotions and other beneficial products.

Eventually the class will focus on marketing. Students in the school graphics department have designed various labels for the honey, with the intent of holding a contest to determine the winning design. Jars will then be sold at school events to raise funds for next year’s bees.

The word is spreading

Quinlan, an employee of United Airlines, applied for a company grant last year through their Eco-Skies program. “The grants are for community green projects, education projects, environmental science, anything ecological,” he said.

At the time he was still going through the process of setting up his own nonprofit, so the application was submitted through the Nicholas J. Sacco Foundation. It was approved, and Quinlan received the maximum amount of $5,000 from United. He has since applied for a 2015 grant and received another $5,000.

That money was used in part to establish the club and class. Quinlan’s goal is to expand to other schools throughout the county.

“I got calls from North Bergen High School now, who want to do the same thing,” he said. “The word is spreading.”

The kids at High Tech are “very attentive and eager to learn,” he said. “We want to teach them not to be afraid and also to respect nature.”

“It’s pretty cool,” said Mariam Abdelmoula, suiting up in her protective gear. “It looks scary but it’s going to be a fun experience. I’m really looking forward to this.”

Art Schwartz may be reached at arts@hudsonreporter.com. 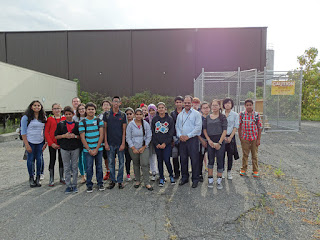 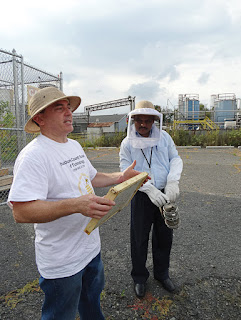 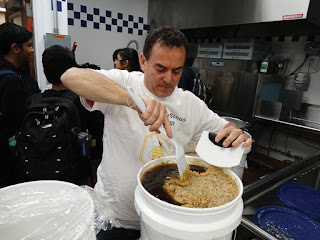