Skip to content
(North Bergen—January 9, 2015) High Tech’s Aaleah Oliver, a resident of Secaucus, won the school-wide competition of the 2015 Poetry Out Loud competition at the North Hudson Center, and now, she advances to the Region 6 Championship, announced Dr. Joseph Giammarella, Principal of High Tech High School.
Oliver recited “Truth” by Gwendolyn Brooks and “Thoughtless Cruelty” by Charles Lamb.  Along with Oliver, Kaylynn Montgomery of Jersey City, Union City resident Emily Fung, and Anna Rezk of Bayonne also participated.  Montgomery tried her hand at “America” by Claude McKay and “Dirge in Woods” by George Meredith.  Fung chose “Zacuanpapalotls” by Brenda Cardenas and “Sonnet 15:  When I Consider Everything That Grows” by William Shakespeare.  Rezk recited “Beautiful Wreckage” by W.D. Ehrhart and “Love Lives beyond the Tomb” by John Clare.
Oliver will participate in the Region 6 Championship, which includes students from the counties of Bergen, Hudson, and Passaic.  The competition takes place on Monday, February 2nd at BergenPAC in Englewood. 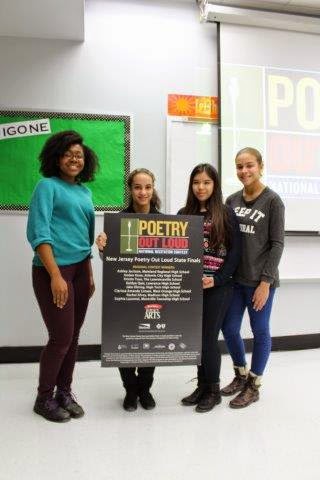 This year’s competition marks the 10thanniversary of Poetry Out Loud. For further information on this terrific contest, please go to www.poetryout loud.org.