(Bayonne, NJ—April 14, 2018) When Anna Rezk was just 13 years old, her family suffered a tragedy: the severe illness and death of her father. The teenager not only filled the family void of her father’s death by helping to raise her two brothers, she also channeled her grief over her dad’s fatal bout with pancreatic cancer into a determination to fight the disease. She wrote about the experience in a spectacularly successful college admissions essay.

“I think seeing him in the hospital atmosphere, seeing the strongest person I had ever known get smaller physically, it was a hard experience, it was really traumatizing on different levels,” said Rezk, now an 18-year-old senior at High Tech High School in North Bergen. “But I think that, in itself, it kind of invoked this feeling in me that I had a responsibility to other people’s dads, that if I had the ability to change the way that other people’s lives could be affected, then I should take advantage of that.  “I’m kind of honoring my dad in that way.”
Anna’s father, Rezk Wanis Rezk, died at age 55.
The essay, along with other signs of Rezk’s drive and intelligence that included stellar grades with a schedule of virtually all advanced placement and honors classes, helped win her a distinction unmatched in the memory of High Tech High guidance officials—she was accepted into all eight Ivy League colleges.  Moreover, every single one of them—Brown, Columbia, Cornell, Dartmouth, Harvard, Penn, Princeton and Yale—offered her a full scholarship.
Anna hasn’t decided just where she’ll enroll in September, though she is leaning toward Princeton University to stay relatively close to her mother, Mervat Andrawes, or Brown University in Providence, which offers an accelerated medical degree program.  And Anna didn’t do a bad job helping raise her brothers: Peter, 20, now a sophomore at Carnegie Mellon University in Pittsburgh; while her twin and High Tech classmate, John, will attend Princeton, where he also received an offer of a full scholarship and will study engineering.
“I’m kind of the bossy one,” she said, adding that her responsibilities included making sure her brothers had dinner. “So I would tell them what to do.”
It was John, the more outgoing of the twins, who spread the word around school that his sister was in such high academic demand.  “I’m not bragging!” John said, beaming with pride at his sister’s smarts during an interview in the office of Assistant Principal Allyson Krone. “I just wanted to let people know.”
The school’s longtime senior guidance counselor, Vincent Nardiello, said he could not recall a student ever having been accepted to all eight Ivies, as well as to the dozen “safety” schools where she also applied.  This is also a special year not only for Anna and John, but for High Tech, which had a total of five students accepted to Princeton among 272 graduating seniors, an unheard-of number for a single school, Nardiello said. The other three are Mousy Lo of Jersey City, Erica De Lacerda of North Bergen, and Muhammad Umar, another Class of ’22 Ivy Leaguer from Bayonne.
High Tech High, which will move into a new building in September, is a career-oriented magnet school whose 1,121 students are drawn from all over Hudson County. Despite the traditional conception—or misconception—of technical schools, Krone said High Tech prides itself on its rigorous academics. Each student is enrolled in an academy, akin to a college major, which Krone and Nardiello said may give High Tech graduates an advantage over their counterparts.
Anna and her brothers were born in Brooklyn after their parents immigrated to the United States from Egypt. The family soon moved to Jersey City, where they joined the city’s large Coptic Christian community. Their father, an armored car driver, moved the family to Bayonne when Anna and John were in 3rd grade, where their intellect was evident even then
“They were, like, automatic superstars,” said Ghenwa Hassan, 17, of Bayonne, a friend of Anna’s since elementary school, and a classmate at High Tech, who will be headed to the Rutgers Ernest Mario School of Pharmacy in September.  “They were the smartest kids in the class.”
Hassan and others said Anna was not all academics. She was a normal teen with a social life, a social conscience, and likes away from school, including fiction writing, something Anna said she thought of pursuing before medicine.
While her father’s death did influence her decision on just what it was she wanted to pursue, Anna said it was her dad and mom, who, though not college grads, had instilled a joy of learning and a strong work ethic in her.
“I guess I was always like that,” said Anna, who laughs easily and takes herself less seriously than her studies.  “It’s hard to predict whether I might have been a slacker if he hadn’t passed away.”
For more on this story, please go to https://youtu.be/RpizIB-fQpQ 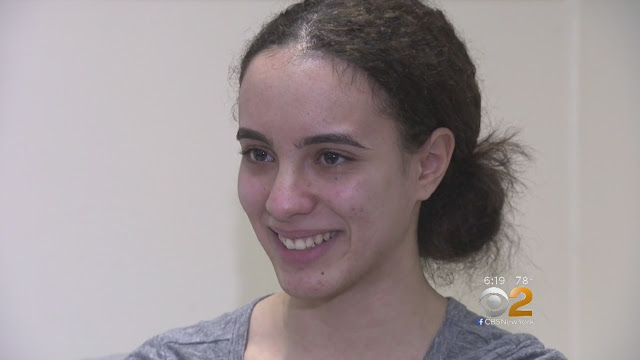