Skip to content
(Piscataway, NJ—May 19, 2016) Out of almost 2,000 letters submitted from New Jersey in the 2015-2016 Letters About Literature contest, High Tech High School received notice that six of its students had been honored at the 2016 Letters About Literature Award Ceremony at Rutgers University’s Livingston College Student Center, announced Dr. Joseph Giammarella, Principal of High Tech High School.
Letters About Literature received almost 2,000 letters from New Jersey students.  After two rounds of judging at the national level, seventy-four letters at the high school level qualified for at least two more rounds of judging at the state level.  Judges originally recognized twenty students from High Tech out of these seventy-four letters to advance to the final round of judging.
Six of these High Tech finalists, however, received honors at the Award Ceremony:  Bayonne’s Natalie Skibniewski; Nicole Lee of Guttenberg; Kearny’s Andrew Tran; North Bergen residents Sarah Bacha, Genesis Cevallos, and Zhixiu Zheng.
Letters About Literature, a reading and writing contest for students in grades 4-12, asks each student to read a book, poem, or speech and compose a letter to the author (whether living or dead) about the ways that the author’s work affected that student personally. Contest judges at state and national levels choose from tens of thousands of letters gleaned from students all across the country.  The 2015-2016 Letters About Literaturecontest, made possible by a generous grant from the Dollar General Literacy Foundation, with additional support from gifts to the Center for the Book in the Library of Congress, celebrates authors who have helped shape America and the world itself. 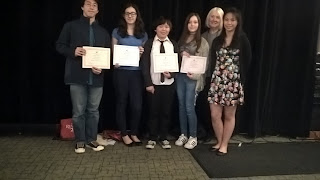 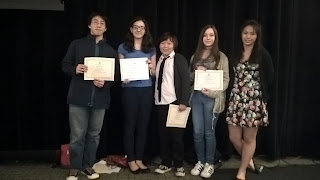