Skip to content
(New York, NY—June 8, 2015) The Boom, a debut play by Language Arts instructor Vincent Nardiello, Jr., will be part of Theater for the New City’s Dream Up Festival 2015 later this summer.
Nardiello, Jr.,a writer whose work has been featured nationally for over a decade, has been a successful stand-up comic and contributed material to other comedians’ corporate and media appearances.  His work has been performed at the White House Correspondents’ Dinner and he recently served on the writing team for Paulie, a television pilot starring Paul Sorvino and Janeane Garofalo.  Now developing his own docu-series, Unconventional, with Excelsior Entertainment, he has written for programming as diverse as ESPN, the Bob and Tom Show, Sirius XM Radio, and has even appeared as a panelist on the Fox Business Channel.
In an effort to save money, many comedy clubs across the country own a “comedy condo,” a small resident in one of the less prosperous parts of town.  Each week, a new group of traveling stand-up comics move into this condo where they will live together, drink together, and silently hate each other as they prepare for the evening’s shows.  The Boom takes place in three acts set entirely in the condo owned by Steel City Funny Factory in Pittsburgh.  Ray Messina, a young comic, may have just received his break in the form of a violent viral video encounter with a heckler.  He has come to town to open for Buddy Darby, a reformed addict turned religious freak relic of the late 80s comedy boom.  Each knows his role for the weekend, but the club owner has a different idea when he chooses to switch the comics’ spots as opener and headliner.
The Dream Up Festival 2015, dedicated to new works, showcases non-traditional drama presented in the traditional way. Theater for the New City maintains a distinctive commitment to high artistic values and community service.
For more information and to purchase tickets for The Boom, please visit http://www.dreamupfestival.org/index.html. 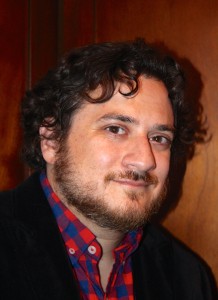