Skip to content
(North Bergen—June 8, 2017) Twelve students from sensei Akemi Dobkin’s Japanese classes have been named this year’s inductees into the High Tech Japanese National Honor Society (JNHS), announced Dr. Joseph Giammarella, Principal of High Tech.
The following students have received this honor: Russell Schmitt, Natalie Skibniewski, and Hannah Tan of Bayonne; Harrison residents Justin Cai and Andy Chae; Genesis Cevallos and Diana Concepcion of North Bergen; Secaucus residents Phoebe Chang and Jay Jasty; Alma Rojas and Rebecca Roses of West New York; and Weehawken resident Eleanore Woodruff.
JNHS recognizes and encourages academic achievement and excellence in Japanese study, unites teachers and administration in developing and maintaining high standards of Japanese language education, and promotes altruistic conduct. In order to qualify for JNHS, students must maintain a B+ and above average in Japanese Language class and a B in their other classes.

“The inductees are hardworking students who have earned this honor by themselves,” says sensei Dobkin.  “I believe that they will continue to make an effort to succeed beyond the Japanese program.” 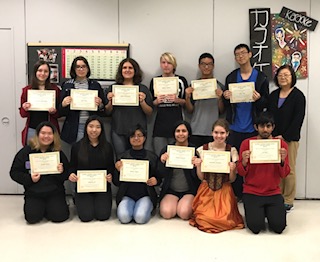